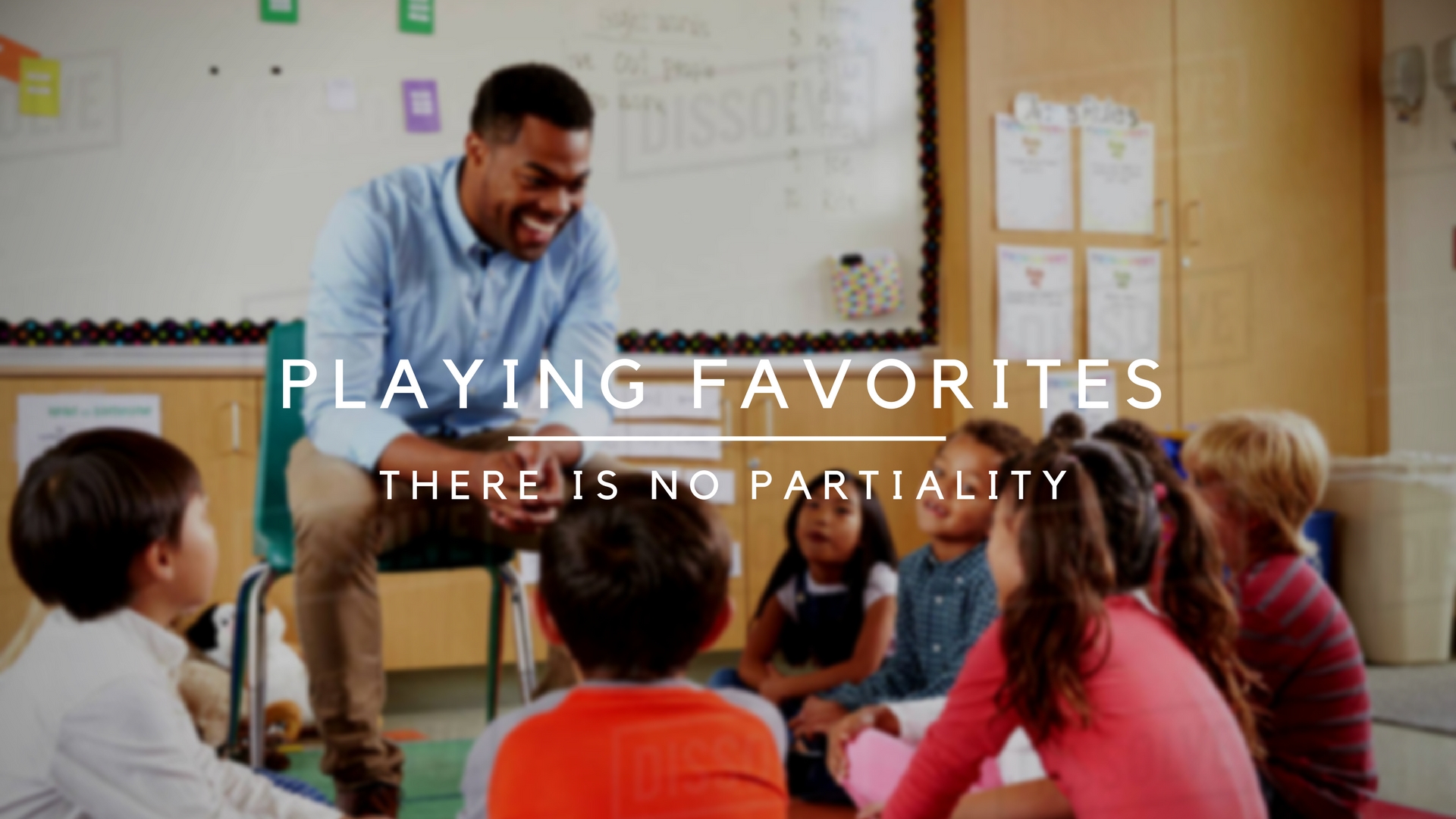 While there have been many inferences drawn from this experiment, I was struck by how quickly the students were ready to make distinctions amongst themselves and act upon those distinctions. Unfortunately, the same can be true of the church and this division within the church is one of Satan’s most devastating attacks.

This division caused by favoritism is what James wrote against in James chapter 2.  In the first thirteen verses of this chapter, he outlines a very strong argument against the practice of any sort of favoritism or partiality within the church.

In verse one he lays out The Principle that Christians shouldn’t play favorites.  As is typical of James’ style, he gets right to the point and the sentence is structured in such a way in the Greek that the imperative “do not show favoritism” is emphatic. He makes it crystal clear that the practice of showing favoritism is in stark contrast to what it means to be a believer in Jesus Christ.  The word partiality (or favoritism in some translations) is an interesting word picture: it means to lift up someone’s head with the idea of judging by appearance and on that basis giving special favor or respect.  It carries the idea of judging based on appearance or some other external factor.

From there James moves on to The Pattern of favoritism in verses two through four where he paints a picture of a rich man being given special honor in their gathering and a poor man being shown dishonor. In their context poverty was a real problem for Christians, so when a rich person came into their assembly there would be a very real temptation to show that person honor at the expense of one who did not have the same means. With limited seating, the scenario James paints is that the rich man is given a seat of honor at the front and the poor man is given the seat of dishonor based solely on their socioeconomic status.  The sin here is that they were making distinctions amongst themselves and were shown to be judges with evil motives.

James continues to drive home his point by further explaining The Problem with favoritism in verses five through 7. He demonstrates that partiality is inconsistent with the heart of God. God’s character demonstrates impartiality: this is a theme throughout Scripture (Deuteronomy 10:17, Ephesians 6:9, Romans 2:11). And so as those that bear the name of Christ and are being conformed into His image, favoritism cannot be present in our lives either.  James then goes on to show them that it is irrational to show favoritism to the rich because in their context the rich often oppressed the poor.  John Calvin wrote, “There is no reason… for men to zealously pay respect to their own executioners, and at the same time to hurt men who are on their side.”  Too often in the church, we focus on external distinctive and hurt those who are on our side.

Finally, James gives The Prescription for favoritism in verses eight through thirteen. He exhorts his readers to love, not to judge, and to show mercy.  We are called to love each other sacrificially and unconditionally. When we make distinctions amongst believers we are really acting like the world acts instead of how God has called us to live and love.  When we express genuine love towards each other, we “do well”, or better translated we “do excellently." James again reminds them that partiality is a serious sin by comparing it to murder and adultery to emphasize the danger of this sin. But lest they lose heart, he reminds them that they are being judged by the law of liberty and are being shown immense mercy. So because they have been shown much mercy by God they need to show each other mercy, which will triumph over judgment.

In closing, the question that I would pose to each of us is: What does favoritism look like in the church today? Certainly, there are areas where we are tempted to make distinctions amongst ourselves and we must prayerfully examine our hearts asking that God would point those things out to us. May God grant us the grace to see each other the way that God sees us.

Here there is not Greek and Jew, circumcised and uncircumcised, barbarian, Scythian, slave, free; but Christ is all, and in all. Put on then, as God’s chosen ones, holy and beloved, compassionate hearts, kindness, humility, meekness, and patience, bearing with one another and, if one has a complaint against another, forgiving each other; as the Lord has forgiven you, so you also must forgive. And above all these put on love, which binds everything together in perfect harmony. - Colossians 3:11–14

A Short Letter on the Truth

The Body of Christ at Work