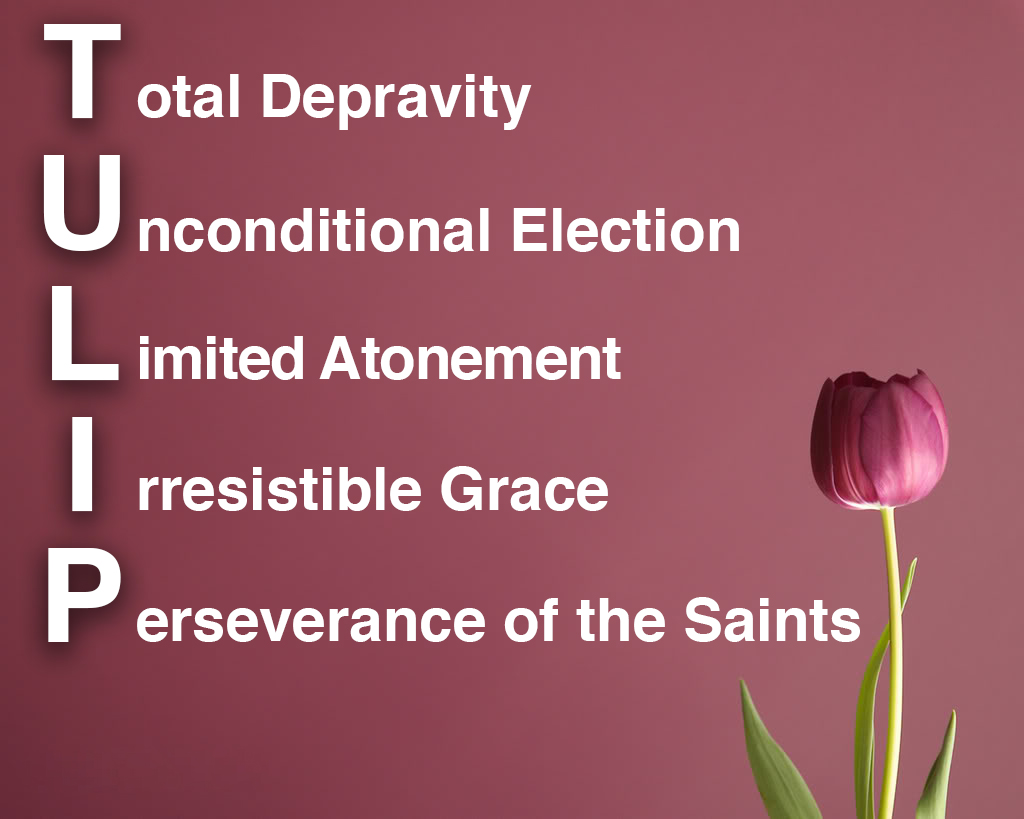 As we looked at last week the Reformers taught that we are saved by Grace alone, through Faith alone in Christ alone for the Glory of God alone as it is taught in the Scriptures alone (The Five Solas “Alones”.

Today, we look at the acrostic TULIP that is a summary of the Reformation teaching on Salvation.  At the time of the Reformation, the Roman Catholic Church taught that sin had merely tainted man and that man through the help of the sacramental system could gain merit with God toward their own salvation.  In contrast, the reformers returned to the teaching of Scripture and of the Church Father Augustine, namely, that man was totally depraved and in need of the grace of God to be saved.

All men are totally depraved and their wills are in bondage to their depraved minds and depraved affections or emotions.  Men’s wills are “free” to choose anything that their minds believe and their affections desire.  Unfortunately the scriptures tell us that all men’s minds are enemies of God and “cannot” be otherwise except through God’s regenerative power.  Also scripture tells us that all men hate God and no one seeks after God.  The net result is that while men are making free moral choices with their wills they are only choosing off the buffet of their fallen, God hating, non-understanding minds and affections which will always inform their will to choose against the Lordship and glory of God.  Thus all men are responsible for their choices freely made.

Against the stark backdrop of man’s depravity and complete inability to remedy their condition is the glorious truth that God has planned from all eternity to show His power, justice, grace and mercy through saving some even though all deserve eternal punishment.  Election is God’s eternal plan and choice to save some for His glory.  God’s choice to save some (election) is based on not on supposed foreseen merit or faith but rather on God’s sovereign choice and pleasure.

The sufficiency of Christ’s atoning work is not limited but rather the scope or purpose of that atonement is limited to the saving of the elect.

Since man is unable to respond to God because of sin and depravity, God in His mercy regenerates some thus making them alive to respond to God with their own now “freed will”.  God’s regeneration and man’s response are almost simultaneous when viewed from our perspective but it is God who moves first.  Man’s response is irresistibly secured by God’s saving grace that is the God given capacity to desire and chose Christ.  Those whom God has chosen are certainly drawn to Christ.  This “drawing” is a work of the Spirit that cannot be resisted.  “All that the Father has given me will come to me”.

Perseverance of the Saints