The Reformation Part 11: Luther vs. The Three Walls of the Romanist 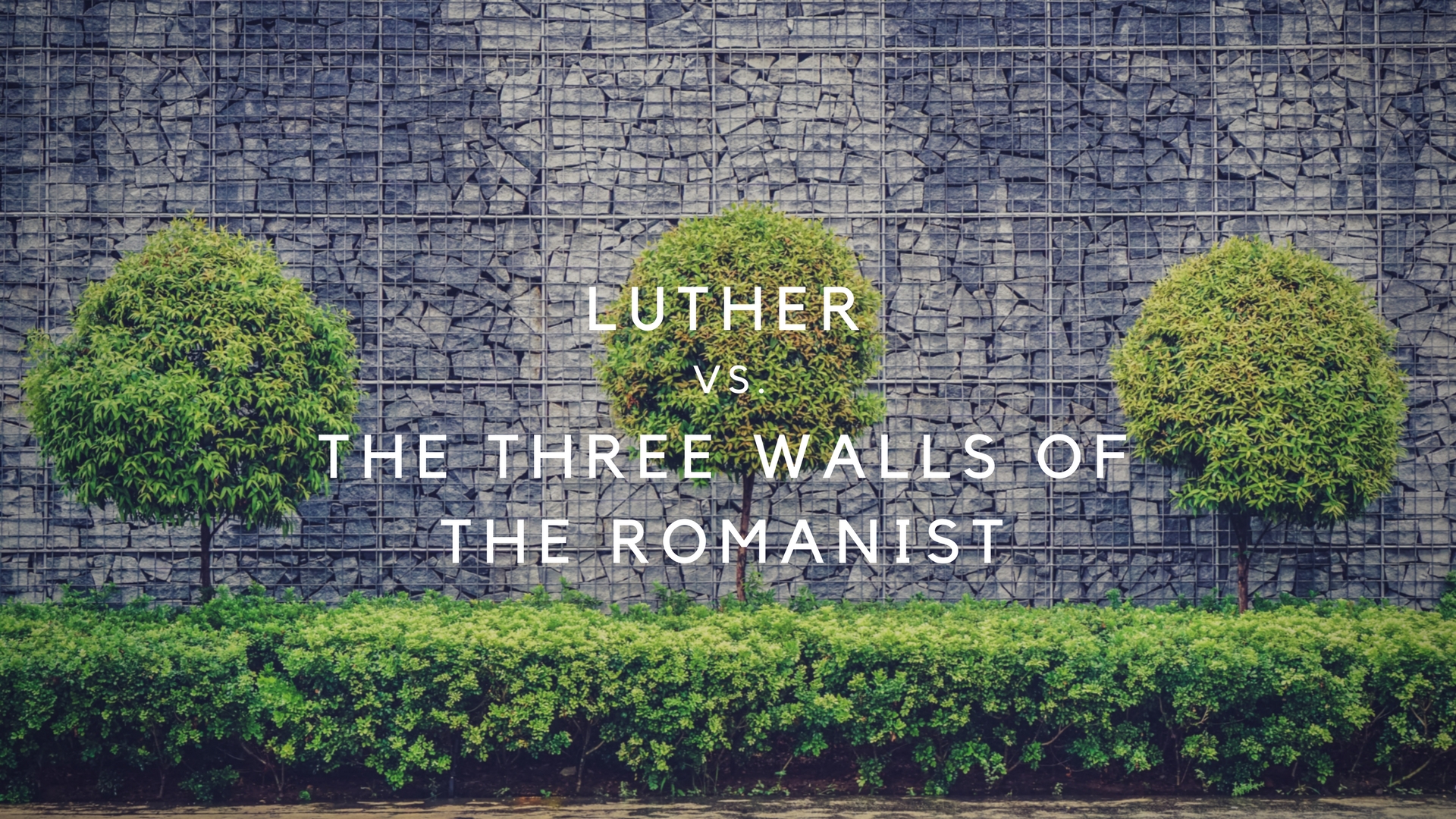 The Reformation Part 11: Luther vs. The Three Walls of the Romanist

By the time of the Reformation, the Roman Catholic Church was attempting to insulate itself against any and all movements that called for Scriptural reform.  By erecting what Martin Luther called, “The Three Walls of the Romanists”, the Papacy believed itself to be impervious to legal, theological and ecclesiastical challenges to it’s corrupt system.

The First Wall
That Secular Authority Has No Jurisdiction Over Them.

The Second Wall
That Only The Pope Is Able To Interpret And Explain Scripture.

The Third Wall
That Nobody, But The Pope Himself, Can Call A General Church Council.

In sharp contrast to Rome, Luther pointed Christians back to the Scriptures as the final authority. Luther’s book “Address to the Christian Nobility of the German Nation” exposed the tyranny of the Papacy and encouraged needed Biblical reformation and renewal in the Church. Let’s take a quick look at Luther’s own words as he exposes the problem and encourages reform.

Exposing The Problem
“The Romanists have, with great adroitness, drawn three walls round themselves, with which they have hitherto protected themselves so that no one could reform them, whereby all Christendom has fallen terribly.”

The Second Wall
“Secondly, if it were proposed to admonish them with the Scriptures, they objected that no one may interpret the Scriptures but the Pope.”

The Third Wall
“Thirdly, if they are threatened with a Council, they pretend that no one may call a Council but the Pope.

Thus they have secretly stolen our three rods, so that they may be unpunished, and entrenched themselves behind these three walls, to act with all wickedness and malice, as we now see.”

Encouraging Reform
“Now may God help us, and give us one of those trumpets, that overthrew the walls of Jericho, so that we may blow down these walls of straw and paper, and that we may set free our Christian rods, for the chastisement of sin, and expose the craft and deceit of the devil, so that we may amend ourselves by punishment and again obtain God’s favour.”

The First Wall
“Therefore the temporal Christian power must exercise its office without let or hindrance, without considering whom it may strike, whether pope, or bishop, or priest: whoever is guilty let him suffer for it. Whatever the ecclesiastical law says in opposition to this, is merely the invention of Romanist arrogance. For this is what St. Paul says to all Christians: “Let every soul” (I presume including the Popes) “be subject unto the higher powers: for he beareth not the sword in vain: for he is the minister of God, a revenger to execute wrath upon him that doeth evil.” (Rom. xiii. 1–4.) Also St. Peter: “Submit yourselves to every ordinance of man for the Lord’s sake . . . for so is the will of God.” (1 Peter ii. 13, 15.) He has also said, that men would come, who should despise government (2 Peter ii.); as has come to pass through ecclesiastical law.”

The Second Wall
“Therefore it is a wickedly devised fable, and they cannot quote a single letter to confirm it, that it is for the Pope alone to interpret the Scriptures or to confirm the interpretation of them: they have assumed the authority of their own selves. And though they say, that this authority was given to St. Peter when the keys were given to him, it is plain enough that the keys were not given to St. Peter alone, but to the whole community. Besides, the keys were not ordained for doctrine or authority, but for sin, to bind or loose; and what they claim besides this is mere invention.”

The Third Wall
“The third wall falls of itself, as soon as the first two have fallen; for if the Pope acts contrary to the Scriptures, we are bound to stand by the Scriptures, to punish and to constrain him, according to Christ’s commandment; “Moreover if thy brother shall trespass against thee, go and tell him his fault between thee and him alone: if he shall hear thee, thou hast gained thy brother. But if he will not hear thee, then take with thee one or two more, that in the mouth of two or three witnesses every word may be established. And if he shall neglect to hear them, tell it unto the church: but if he neglects to hear the church, let him be unto thee as a heathen man and a publican.”

Leading up to the 500th Anniversary of the Reformation on October 31st, I will be reflecting on key principles taught by the Reformers.  Next week we look at The Institutes of the Christian Religion.

There may be a day soon in our country that Christians will need the courage of Luther to stand against another type of tyranny.