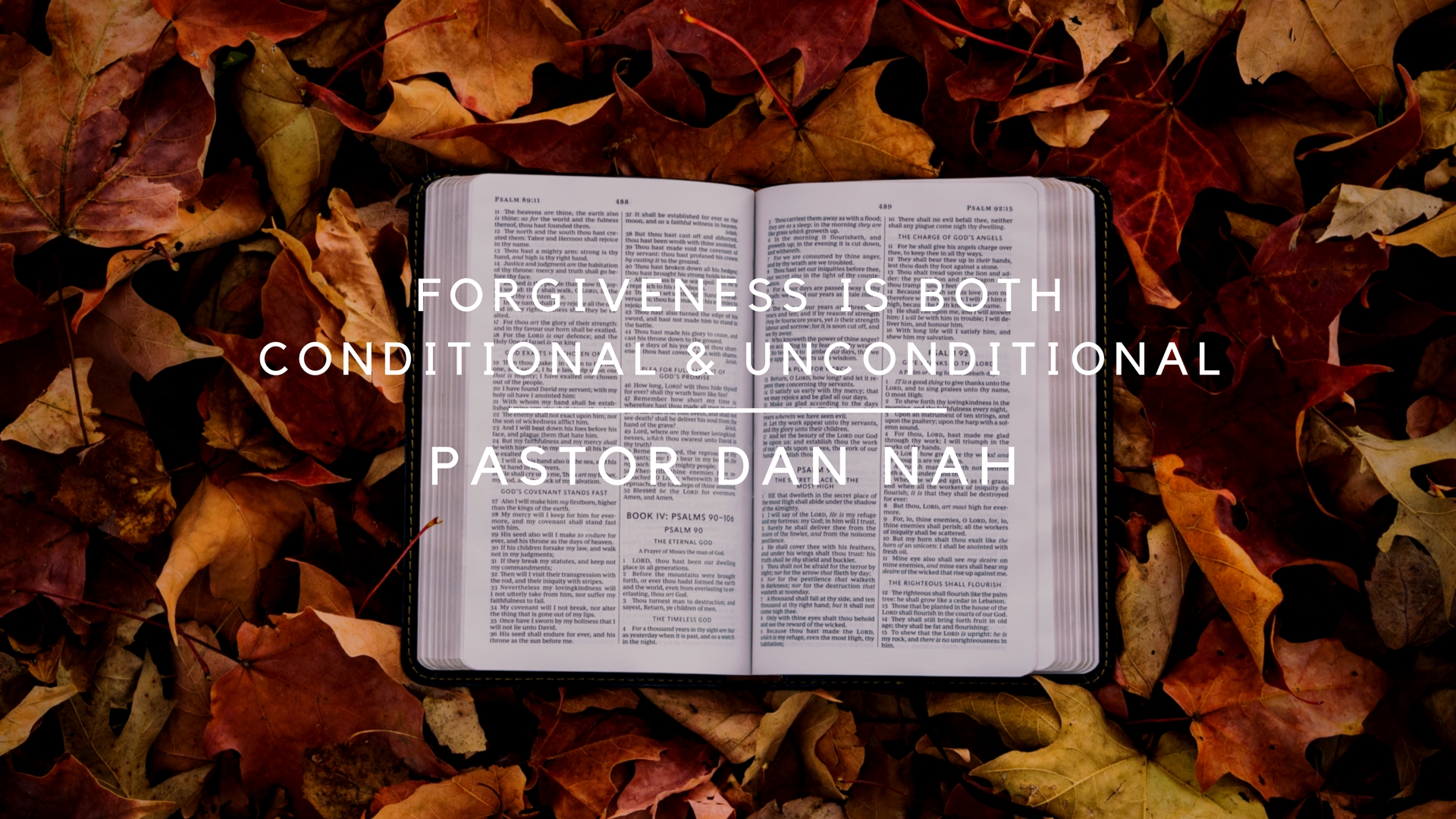 Forgiveness is one of the great realities of the Christian life.  We have been forgiven by God, so we are to forgive one another.  Ephesians 4:32 says, "Be kind to one another, tenderhearted, forgiving one another, as God in Christ forgave you."  Someone once said that unforgiveness is drinking poison hoping that the other person will die.  In contrast, to forgive others is to be like God.  ". . . as far as the east is from the west, so far does He remove our transgressions from us." (Psalm 103:12)

Some teach that forgiveness is conditioned upon the repentance of the offending party.  The reasoning goes that God only forgives those who are repentant.  Thus a Christian is justified at times to withhold forgiveness.  This type of teaching would appeal to Luke 17:3 which says: "If your brother sins, rebuke him, and if he repents, forgive him."  The reasoning goes:  if there’s no repentance, there’s no forgiveness!

Yet there are passages which teach the concept of unconditional forgiveness.  Mark 11:25 says, "And whenever you stand praying, forgive, if you have anything against anyone, so that your Father also who is in heaven may forgive you your trespasses."  In this passage, the offending party is not even in view.  Whenever a believer comes to the Lord in prayer, that believer is to forgive others from the heart.  So we are taught to pray, “forgive us our debts, as we also have forgiven our debtors.” (Matt 6:12)

Furthermore, the context in Luke 17:3-4 actually seems to emphasize unconditional forgiveness.  Right after Jesus says, "if he repents, forgive him" (v.3), He adds:  ". . . if he sins against you seven times in the day, and turns to you seven times, saying, 'I repent,' you must forgive him.” (v.4)  If someone punched me seven times in a single day, I would have a lot of doubts about the sincerity of his repentance!  Yet Jesus says, even in those cases, you have no right to withhold forgiveness.

Forgiveness is both unconditional and conditional.  It is the attitude of the heart that releases the offending party from moral debt or obligation, even when the offender is not in view.  This attitude also leads to the action of the Christian who then embraces the offender lovingly and lavishly, when the person does repent of their sin (Luke 15:20-24).

John MacArthur sums it up well in saying:  "To make conditionality the gist of Christlike forgiving seems to miss the whole point of what Scripture is saying. . . the emphasis is on forgiving freely, generously, willingly, eagerly, speedily -- and from the heart.  The attitude of the forgiver is where the focus of Scripture lies, not the terms of forgiveness."

May the Lord grant us to experience the joy of forgiveness!

Good Fellowship is a Little Uncomfortable

Listening Well, Caring for Others

Change Is A Community Project

The Type of Hard Work That Does Not Please God

The Marriage Supper of the Lamb

The Beauty of Baptism

Dependence on the Holy Spirit